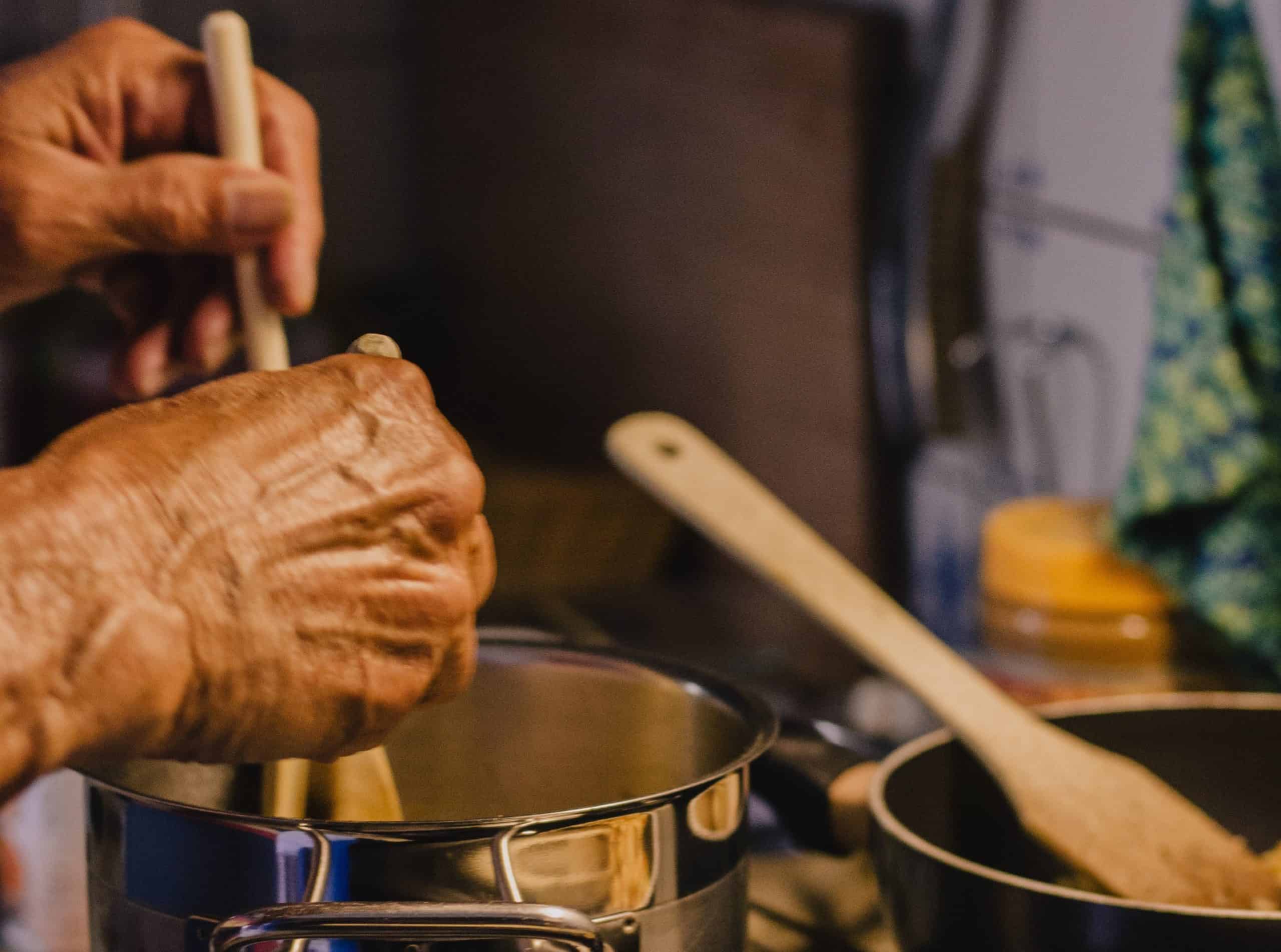 Rather like my advice on making a stew from leftovers, there is little point in me posting a recipe for either the cream of mushroom soup or the satay turkey curry I have thrown together with my Christmas leftovers. This is because not all leftovers are created equal – for every household that woke up on Boxing Day to enough sprouts to wind-power the national grid, there will be another household wondering what to do with the remains of an ambitious turkey purchase. And when you are magicking a meal out of leftovers, not only does it depend on what you actually have left over – it also depends on what you might have in the kitchen and what extra ingredients you can be bothered to leave the house and buy. It’s the Christmas-new year period where the days can merge into one, you might forget what the date is, and pyjamas are perfectly acceptable for a trip to the shops.

But I can offer some guidance based on my own Christmas leftovers cookery, complete with a burnt-out blender and the accidental melting of a peanut butter jar.

First, I turned leftover potato and sweet potato mini roasties and parsnip remnants into the basis of a cream of mushroom soup. The starchiness of these vegetables – plus the inherent blandness of parsnips and spuds – makes them an ideal base for a thick, hearty soup. The potatoes were a bit spicy and the parsnips had been roasted with red onion and slathered in a Dijon mustard sauce so that added some early flavour.

I chopped up a fresh red onion and 150g of mushrooms that I almost forgot about, and threw them into the pot with some melted butter and a few chunky cloves of crushed garlic and cooked them for about five minutes on a medium heat. Then the contents of the pot went into the blender with a cup of chicken stock and a little full fat milk, another Christmas leftover, this time from the brandy cheesecake ice cream I served with the pudding.

VRRRRRRRRROOOOOOOOOM! went the blender. Everything was pulverising nicely until I started to smell burning plastic. Fortunately, the blender decided to pack it in after everything was nicely blitzed so I removed the jug, poured the thick, blended liquid back into the pot – and opened the back door to let the tendrils of dark grey smoke escape.

There was also some leftover single cream from the sprouts gratin. Seriously, what a palaver that was – I think I’ll do my asparagus in bacon and parmesan for a hint o’ greenery on the Christmas dinner plate next year rather than going through the annual festive farce of trying to make sprouts edible. But I digress… There was about 100ml of leftover cream so I  swirled that into the soup, seasoned with salt, pepper and a little tarragon, which adds a French and floral note to the Dijon that was still attached to the parsnips.

The resurrected Christmas leftovers-based soup will go well with yet another leftover – the bacon dust from the Bloody Mary-inspired tomato soup, which was our Christmas Day starter. Click here for that recipe.

Once I stopped swearing about burning the bum out of my second blender for 2020, it was time for Christmas leftovers trick number two – a satay turkey curry. Bridget Jones’s Diary may have made the turkey curry buffet famous, taking the piss out of her social-climbing parents, but it’s not to be scoffed at. Turkey is a great meat for a curry.

Again, this was all about stuff I had lingering in the cupboard and fridge. I chopped up leftover turkey into bite-sized pieces, diced a red pepper and a yellow pepper, finely chopped a red onion and diced a potato I peeled by accident on Christmas Day (hence so many leftover mini roasties…). Out came my other big pot and the onion was fried in some hot groundnut oil with two cloves of garlic. Then the potato and peppers went into the pot.

I had a jar with scrapings of peanut butter lurking around the edges so I filled it with chicken stock, put the lid on, gave it a shake – and hot stock went everywhere. The damn jar was made of plastic and it melted into a Salvador Dali shape. The lid refused to stay on, more swearing ensued, and I poured it all into the pot, getting the last of the peanut butter out with a teaspoon.

Then a tin of coconut milk went in and, because I had some store-bought satay sauce in the fridge, I cheated and threw some of that into the pot to thicken the mix. I’m never 100% delighted with the spice combination of store-bought sauces so I added extra ginger, coriander, salt and pepper to the pot. I decided it wasn’t quite peanutty enough so I stirred through a couple of generous spoons of peanut butter from the new jar and finally the cooked leftover turkey went it. I gave it a few more minutes on the heat and, hey presto, apart from the melted jar incident, it was a perfect lazy day curry that will do nicely for dinner tonight, served over some rice.

Do not be afraid of Christmas leftovers – there’s always something you can do to ensure they don’t go to waste. Be creative, don’t be afraid of experimenting and, chances are, your leftovers will turn into extra meals for days. Soups, curries and stews all freeze well too so don’t feel obliged to wolf it all down by tomorrow.