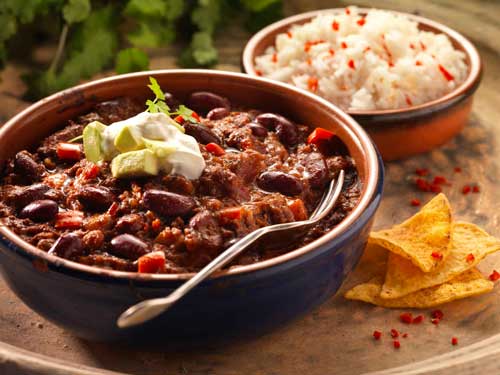 This chilli con carne is bursting with food cheats. I’ve already written a couple of posts for this website on food cheats – you check them out here and here

This recipe probably won’t end up on any restaurant menu but that’s not the point. Indeed, it’s not really the point of this site full stop. We’re a website for home cooks and it would merely be a bonus if a restaurant decided to serve any of our dishes. And this chilli con carne ticks a lot of home cooking boxes – the ingredients aren’t complicated or hard to find, it makes plenty so you can freeze it in containers, it works just as well on rice or pasta as it does as a nachos dish or atop a baked potato, and I’ve left the spice quantities up to you because everyone’s mileage varies when it comes to heat levels. A dollop of sour cream is always wise if you want to temper the hotness. Grated cheese and guacamole are also welcome additions, especially if you go down the nacho or baked potato route.

For this chilli con carne, I’d bought 1kg of beef mince because it was on offer at Sainsbury’s and divided it up into 250g portions for the freezer – as there is only two of us in my household, this makes sense. I won’t need to buy mince for a little while now.

And finally, there’s something sentimental for me about chilli con carne – in 2007, I had a lovely boyfriend called Stuart who was killed in a swimming accident. He made a really good chilli con carne – it was his signature dish. We had a very happy meal around a balcony table (we were in Dubai – you can eat outdoors for most of the year. I do miss it sometimes…) at a friends’ flat and it will always be a fond memory of a relationship cut short. Indeed, Stuart made so much chilli con care that night that his best mate put the leftovers in his freezer. A few weeks after Stuart died, he remembered the frozen chilli and ate a meal in his honour. It takes me back to a time that was happy and then incredibly sad – but it’s a time I will never forget. Read more about it here.