In celebration of fish and chips on a Friday night

Fish and chips on a Friday night has been a fixture in my life. We used to get fish and chips from a greasy spoon near our house in Wagga Wagga, a rural Australian city. As Wagga is 170 miles from the nearest coastline, I have no idea where the fish came from or how fresh they were, but we survived eating them for years. Friday nights of fish and chips, a chocolate Paddle Pop ice cream for dessert and a quick play on the Atari at the greasy spoon – that’s a pretty damn good way to end the week when you’re seven years old.

Now I live in the UK, the tradition continues. Originally a Christian tradition to abstain from eating red meat on Fridays as a penance to mark the day of Jesus’s crucifixion, this evolved to today’s Friday fish and chips routine. It steadfastly continues to this day even if church attendance is down. The queue outside my local chippy in South London is always a multicultural one on a Friday night, a microcosm of this country at its best.

And, even better, fish and chips, considered one of the most British of dishes came here as a result of immigration in the 16th century.

Spanish and Portuguese refugees are the most likely pioneers of fried fish in this country. At the same time in the 16th century, Jews who were facing religious persecution in Portugal and Spain came to the UK for their own safety. One of the fine kosher dishes they brought with them was Pescado frito. Particularly popular with Sephardic Jews, the white fish, usually cod or haddock, was coated in a thin, floury batter and fried on Fridays in readiness for a meal on Saturday, the Jewish sabbath. The batter was said to preserve the fish so it could be served hot or cold the next day. Pescado frito became popular in London beyond the Jewish community.

The chips component can probably be traced back to the arrival of the Huguenots – French protestants escaping religious persecution in the 17th century – who, like many Jews, settled in the East End of London.

Then, around 1860, Joseph Malin, an Ashkenazi Jew from eastern Europe, added potatoes to the mix when he opened the UK’s first fish and chip shop in London’s East End.

And now most of us couldn’t imagine a Friday night without fish and chips. Since lockdown, we’ve taken to doing fish Fridays at home. I’ve been buying whatever fresh fish is on offer at a supermarket, adding my own touches, and then bunging some frozen chips in the oven because, frankly, at the end of the week, I do not have the energy to make chips from scratch. 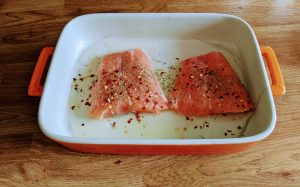 This is salmon with chilli flakes, salt and dill before it went into the oven with sweet potato fries. I served it with a sauce of yoghurt whisked with chicken stock, mint, salt, garlic and sumac. 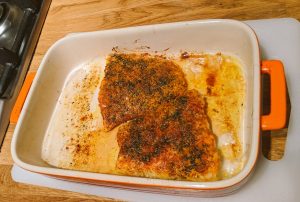 This one is cod fillets brushed in olive oil, followed by a fine layer of tomato paste spread over with a teaspoon. I then sprinkled with coriander, ginger, paprika, cumin, chilli powder and salt. It was baked at 180 for 20 mins with frozen sweet potato fries. 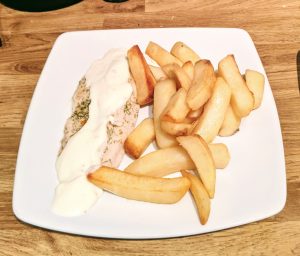 Here’s another cod with oven chips. This time, the cod has majoram, dill, olive oil and lemon juice as a marinade. The creamy sauce is just creme fraiche, lemon juice, salt, paprika, onion granules and garlic cooked quickly on the stove in about five minutes at the end of the cooking time for the fish and chips.

And for tonight, it’s trout – another childhood favourite from Australia, where it swims readily in rivers near my hometowns – and this time, it’s marinating in the fridge in olive oil, lemon juice, salt, pepper and fresh time. I’ll do a creme fraiche and lemon sauce tonight. I can’t wait already. And, unlike a memory from about 1983, we don’t have a cat so there’s no risk of a spoiled ginger cat called Harry jumping onto the sink to lick the trout a friend of ours caught. From memory, Mum just gave it a rinse and served it! 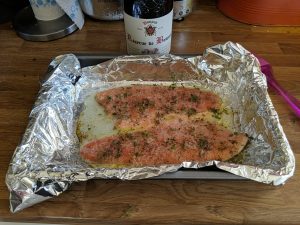