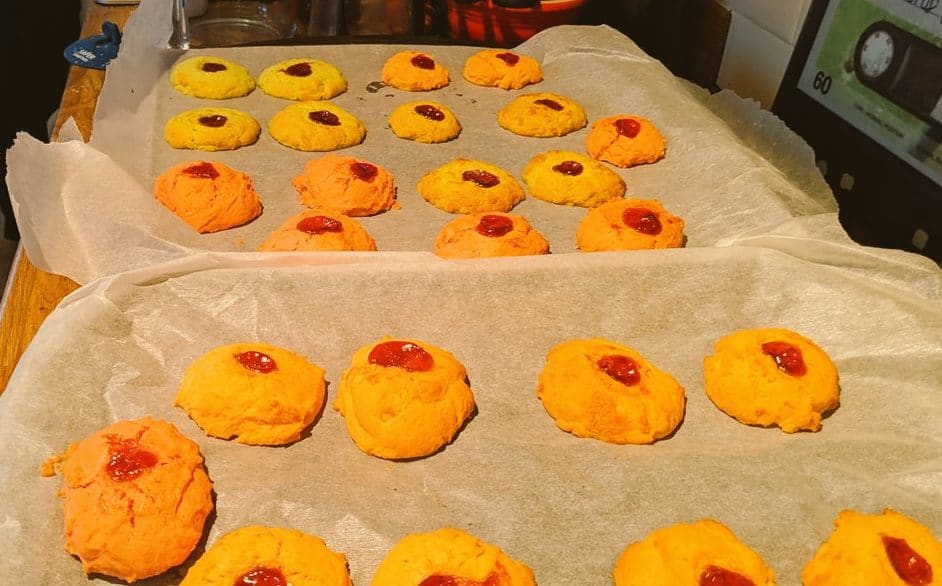 My friend Claire, the mother of my goddaughter Morgan, asked me to develop a recipe that she and Morgan could make together. I decided to make it fun, colourful, tactile, a little bit messy – and mildly educational.

Disclaimer: These biscuits do not qualify as health food. As an aunt, I’m all about the fun, not the fruit and veg.

Disclaimer: The presentation here is not exactly cookbook standard. These are biscuits for kids to make. I had to put myself in the headspace of a four-year-old as I developed this recipe. There are not many four-year-olds who are making biscuits for service at a five-star hotel high tea.

My starting point was jam drops, a recipe I was taught in high school home science classes in about 1988. They are really easy. If you want to make them without turning them into ridiculous traffic light shades because you’re not four years old, feel free to skip the food colouring step.

For Morgan, I knew I wanted to make something colourful because her favourite colour is “rainbow”. I wanted to create something that can either be mixed by hand or a parent can step in with electric beaters. And it needed to be something where she could use her little fingers.

I went for the traffic light colours of red, amber and green for these biscuits because Claire and I became friends when we were both writing about cars for a living in Dubai in about 2007. We first met on a Land Rover press trip to Herefordshire and London, which involved driving in the mud, a castle, a friend of ours convincing the staff of Browns Hotel in Mayfair that he was an actual lord and, once we’d finished driving for the day, too much wine. I’m not sure how much more responsible we are these days – since that press trip, we’ve both got married, bought houses and drive more practical cars than when we first met. But we’re still prone to being silly and I hope that never changes.

On this Easter weekend, I took my aunting skills to the next level. On Good Friday, I developed the recipe for these biscuits and made quite the mess in the kitchen. Then on Saturday, I delivered the rainbow biscuits to Morgan and to my niece Anya, along with a few Easter goodies. I left both houses before the full effects of the E number-laden biscuits had taken hold so if any chaos ensued, I can only apologise…

Seedless jam of your choice – I like to use raspberry. The jam will congeal nicely in the middle of each biscuit when it goes in the oven.