French onion dip with a twist 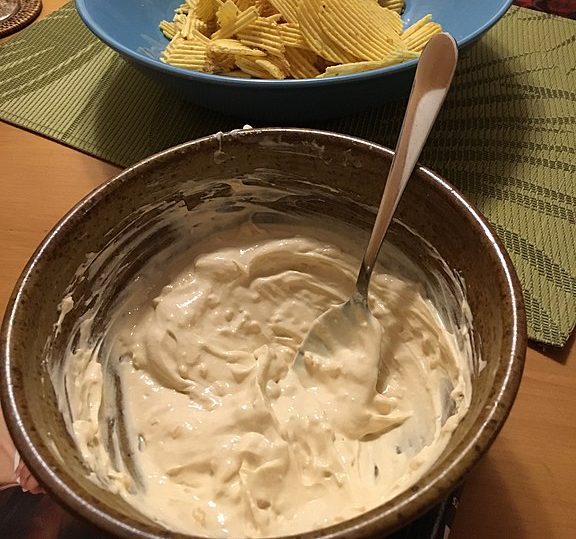 French onion dip is an Aussie barbecue classic. You can buy it readymade in the shops, or make it yourself. It’s often a simple two-ingredient affair of sour cream and French onion soup powder from the supermarket mixed together with a whisk or an electric beater. One might throw in some chopped chives for a bit of greenery, but nobody tucks into the French onion dip for the good of their waistline.

This more-ish dip is usually served with Arnotts Jatz crackers, which are bit like Ritz crackers, only better, although I would say that, wouldn’t I? Click here for a classic Australian Jatz advert from 1991.

But here in the UK, the French onion soup powder is hard to find, so I’ve had to make a few adjustments to this dip that is easily made in a blender or with an electric beater. If you don’t have either of these appliance, it will still work if you stir vigorously with a fork or whisk. It’ll just take a wee bit longer and use a bit more elbow grease, but it’ll still be delicious.

Onion powder, dried, fried onion, garlic powder, a little Greek yoghurt, cream of mushroom soup powder and chives from the garden all conspire to take this French onion dip up a few gears, while still having the mouth-filling creaminess of the dip I remember from many a barbecue in Australia.

Three heaped tablespoons of dried, fried onion (I get mine from the Turkish grocer)