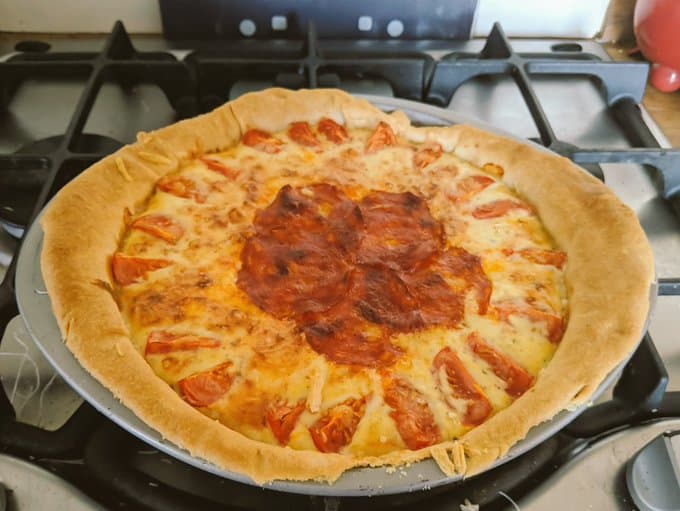 As you can probably tell from the photo, I have always had a love-hate relationship with pastry. Occasionally, I have somehow managed to nail it, such as using store-bought puff pastry to great effect in my umm ali dessert or making it from scratch with mince pies. And I am sure Sam will agree with me when I say that more often than not, store-bought pastry saves a lot of mess and heartache in the kitchen. To see what I mean, check out her fabulous party pies recipe, an Aussie classic.

But I digress. Last week, I decided to draw down on my ridiculous oversupply of eggs by making a quiche. I sort-of used Mary Berry’s quiche Lorraine recipe for guidance but deviated from her wisdom pretty darn quickly. For example, her quiche recipe suggested cream but as well as having enough eggs to feed an army, I also needed to get rid of some half-fat creme fraiche, so I compensated for the lack of fatty richness by creating a quiche mixture that included four – FOUR! – eggs.

And while Mary makes pastry look easy, I really couldn’t be bothered to make it from scratch on a lazy Sunday night so I bought a roll from Asda, cranked up Absolute Radio 90s and set about making a quiche laden with all manner of goodies, including a topping of chorizo slices.

Before you start cooking, a cautionary tale – if you eat this bad boy straight out of the oven, the eggy filling is highly likely to collapse and suddenly resemble that rather jelly-like scrambled egg you often see in hotel breakfast buffets. Like revenge, this quiche is definitely a dish best served at the very least cooled down and ideally chilled.

One roll of store-bought shortcrust pastry

200g grated cheese – any cheese that melts well will do

Slices of chorizo to decorate