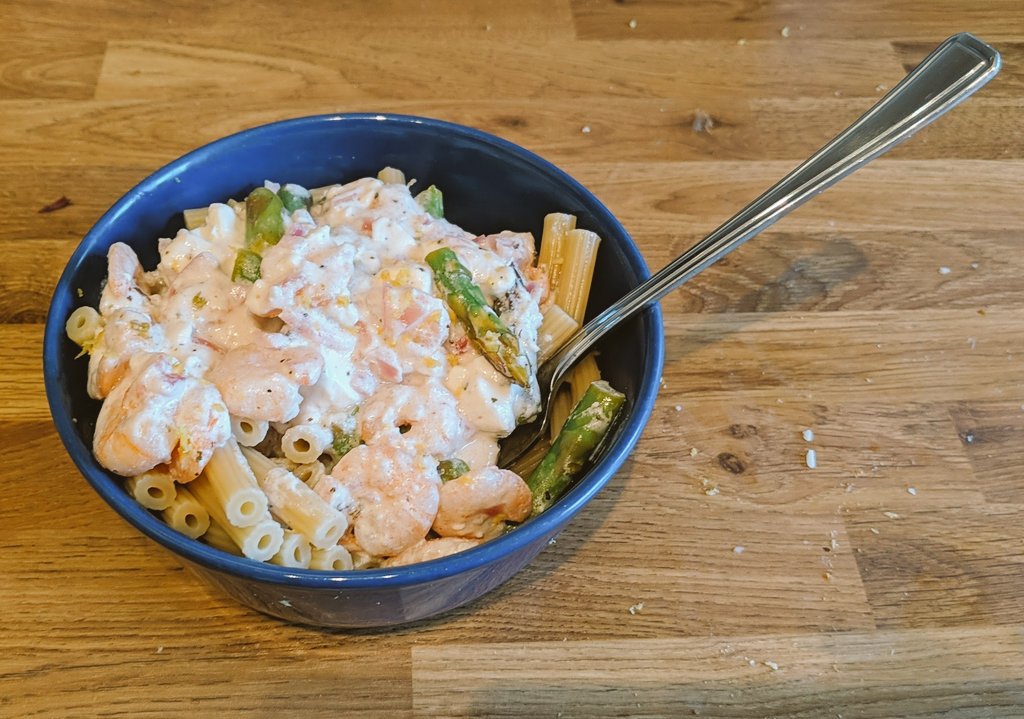 Throwing together a pasta dish is regular occurrence in my kitchen. Sometimes I’ll stick with something I’ve made more times than I care to remember, such as bolognese, and other times, I’ll invent something, usually with whatever happens to be lurking in the fridge and cupboard. This prawn pasta is an example of the latter.

For a prawn pasta, a fancy Italian restaurant may well use a delicious catch of the day, but for this one, I used a great food cheat – the pre-cooked packet of prawns from the supermarket. It’s an affordable alternative to fresh prawns and there’s no preparation involved, so it’s perfect for those who are broke, busy or both.

The ingredients for this prawn pasta are simple but each one works hard. The lemon juice, rosemary, oregano and asparagus all pack big flavour punches, while the creme fraiche and feta makes a delicious sauce texture with minimal fuss. It’s sort-of Greece-meets-Italy on a lazy weekday night.

I tend to use low-fat creme fraiche, not just because I make vague attempts not to eat too much fat, but also because it’s one of the rare low-fat ingredients that doesn’t feel like a watery, lame alternative to the full-fat version. But if you want to use full-fat creme fraiche or indeed actual cream, that’s up to you. I’m not going to sit here in judgement of your prawn pasta.

Juice of a lemon or 3 tablespoons of bottled lemon juice