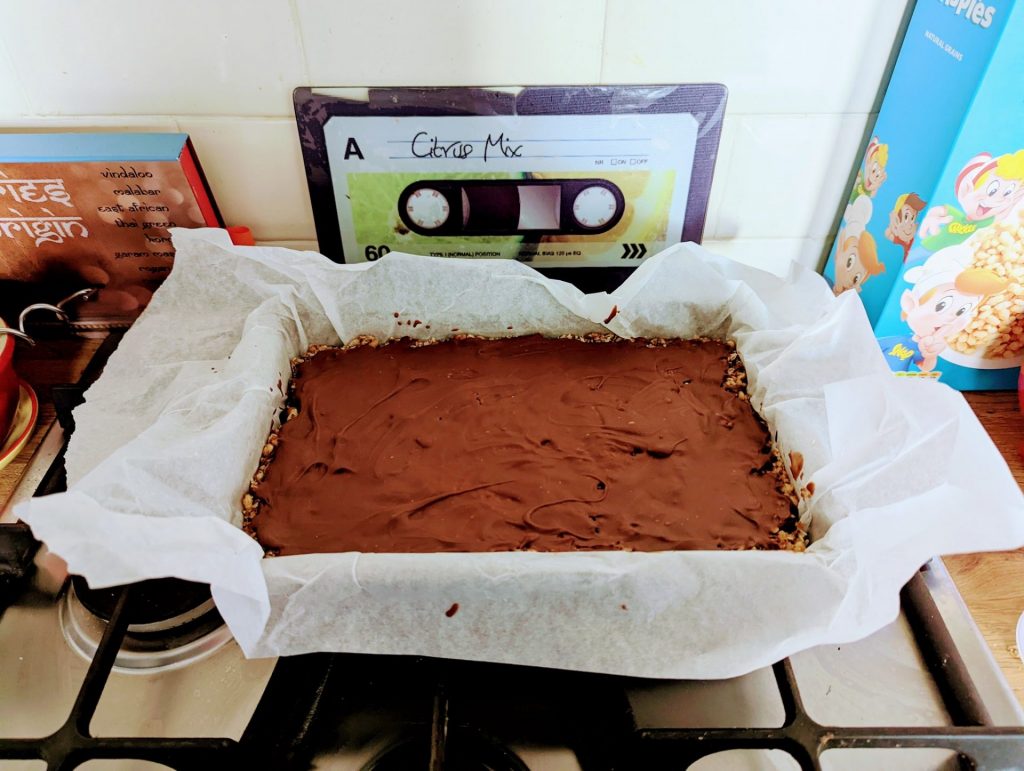 First, let me reassure everyone that no cows were harmed in the making of cow poo slice. I did not bother any bovine creatures with high fibre meals to create a slice that tastes much, much better than its name suggests.

I was first made aware of cow poo slice thanks to Mum. She told me all about it, how delicious it is and how popular it is among her friends in my Australian hometown of Bathurst. And just before Christmas, when work was winding down for the year and festive food preparations were in full swing, I decided to give the slice a go. Or give it a burl, as we might say in Australia, particularly if we are over a certain age.

But because I cannot leave a recipe alone, I decided to add my own twist to the cow poo slice. Instead of festooning the mixture with dried apricot and sultanas, I threw in dried cranberries and glace cherries. As I was taking the slice up north for a very Geordie Christmas, I thought these additions would make things a little bit Christmassy.

Shopping for the slice ingredients made me a bit nostalgic for Australian breakfast cereals. The recipe demands Rice Krispies, which are sold in Australia as Rice Bubbles. This took me back to my childhood. Rice Bubbles were a bit of a treat – I remember eating them at my grandparents’ farm alongside my much-missed Pa. On camping trips, they were served from those little boxes that never seemed big enough. Inevitably, the Rice Bubbles and Coco Pops were the first to go as we never ate them at home. And when the milk was poured on, I genuinely thought the “snap, crackle, pop”, as promised by the TV adverts, was a miracle of science.

Cow poo slice also calls for a breakfast cereal that I firmly believe has a better name in Australia. An Aussie recipe for this slice will list Weet-Bix as a crucial ingredient. Here in the UK, it is known as Weetabix – I have never been able to fully accept that unnecessary “a” in the middle and resolutely refer to them as Weet-Bix. As Weet-Bix was considered a much healthier choice in the Lewis household than Rice Bubbles or Coco Pops, I was, as the TV advert suggested, an Aussie kid who was a Weet-Bix kid. But when I went to Asda to buy the ingredients, I went for a third option in the wheaten breakfast biscuit market – the cheapest option was Asda’s own brand and, hilariously, it is marketed as Wheat Bisks. Full marks for correctly spelling “wheat”, while inventing the word “bisks.

Of course, as I am a granola-yoghurt-and-Earl-Grey kinda girl at breakfast these days, I’ve now got a shedload of Rice Krispie and Wheat Bisks in the kitchen. Looks like I’ll just have to make some more cow poo slice. What a shame…

200g cooking chocolate (milk, dark or white all work well here – up to you!)