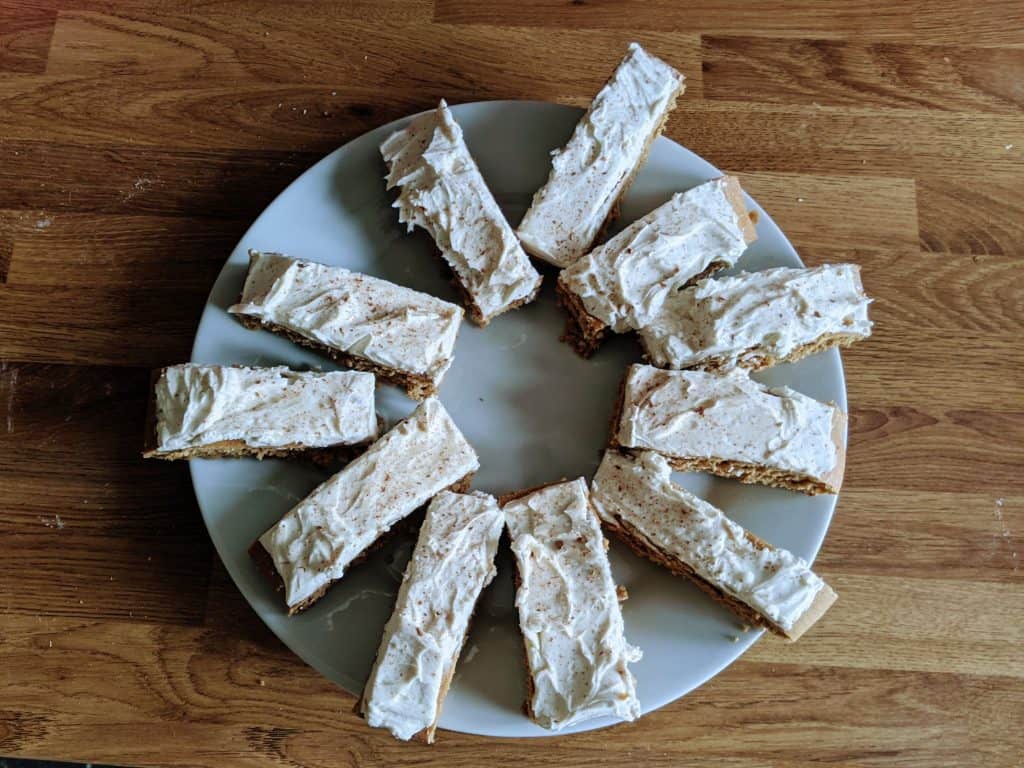 Sometimes good things happen by accident, such as the discovery of the glue that’s used on Post-Its, and the coffee sponge recipe below. To thank my friend Kate for doing me a couple of good turns, I told her I’d invent a cake in her honour. We had a consultation in which she told me she enjoys coffee cakes and carrot cakes, as well as cinnamon. As I have already posted two carrot cake recipes in recent times – a spicy carrot cake and a tooth-rattling salted caramel carrot cake –  I figured a coffee cake was the way forward. My sister used to make a coffee layer cake when we were kids, so if she could do it at the age of about nine, surely it would not be beyond my powers to emulate her efforts.

I asked Kate how she takes her coffee and she told me “strong and black”. I started entertaining visions of a dark yet fluffy cake topped off with mascarpone frosting and grated cinnamon. What could possibly go wrong?

My starting point was a teacake recipe with which I would take some extreme liberties. When I added 200ml of almost-pitch black coffee, rather than tea, a rich, dark batter emerged. I was excited. But the first inkling that the vision in my head would not quite match the final outcome came when I started pouring the batter into a baking tray. Instead of faffing about with a layered cake, I was trying to achieve a tray-baked cake that would be easy to cut into slices for elevenses. But as I poured the batter, it didn’t look like enough for such a mission.

Still, I told myself that the self-raising flour would probably work its magic and it would rise magnificently. I was wrong but after half an hour in the oven, something suddenly seemed so right.

I gingerly opened the oven door to check on its progress and I was greeted by a sleek-surfaced expanse of sponge that was bouncy to the touch. This was not going to be the fluffy cake I had in mind. If it stayed in the oven for much longer, I feared the top would start to cremate. I tested it with a skewer and it was cooked right through. Could I have accidentally created coffee sponge fingers? Could this be saved by some judicious slicing and the liberal application of mascarpone frosting? There was only one way to find out.

I cut a strip off the end and had a taste. And my husband, my chief cake tester, had a little piece too. It was indeed a rather satisfying sponge, even if it was not as high as I thought it would be. But it was more-ish and the addition of mascarpone frosting would make it even more so.

With what limited patience I could muster – while updating Kate on Facebook chat the whole time – I waited for it to cool down, made mascarpone frosting, slathered it on with gusto and cut it into little fingers that were the ideal size to accompany a cuppa.

As well as being a lovely treat with a cup of tea or coffee, the unfrosted sponge fingers could also be used to build a tiramisu. I know most people buy sponge fingers from the supermarket for a tiramisu but this way, you can really make the whole thing from scratch. Impress your guests when we can finally throw dinner parties again!

The coffee sponge fingers were not what I had in mind but they are addictive. I can’t wait to see Kate in real life again and share some with her.

For the sponge fingers