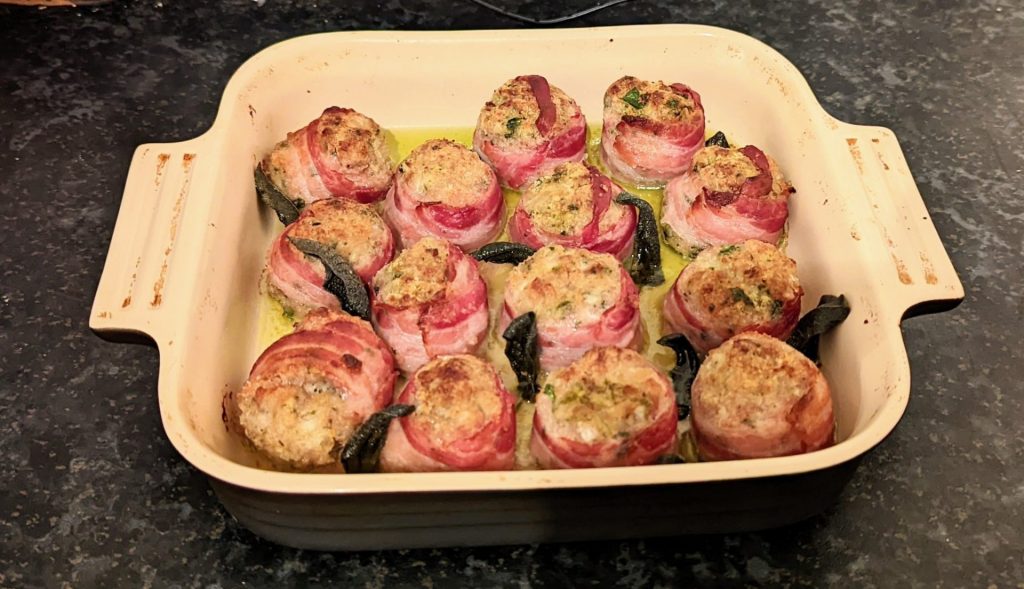 Christmas Dinner is a curious beast – there are some things that are generally considered integral to a Christmas dinner, but most of us only eat them on December 25. Chief among these is roast turkey – it’s a difficult bird to roast without it drying out, it is not a particularly flavoursome bird, and most people don’t roast a turkey at any other time of year. There are very sound reasons why more people are choosing different meat to roast on Christmas Day or going meat-free. See also, sprouts – how many of us eat sprouts outside of Christmas Day in a non-ironic manner? Just as lamb, goose and nut roasts are becoming more popular for Christmas, there are very sound reasons why many a festive meal involves finding inventive ways to make sprouts edible and prevent the kitchen smelling of farts.

But then there’s stuffing – squishy, delicious, flavourful stuffing. And stuffing balls are especially tasty. It seems rarer and rarer to use stuffing to actually stuff the turkey, which is understandable. Instead, stuffing balls make a fantastic side dish, they are fun to make, they taste great as leftovers and it is a mystery why this particular part of the Christmas dinner isn’t made more often.

Making stuffing balls really is a pretty simple matter of frying, mixing, rolling and baking, so why not make them for occasions beyond Christmas? This stuffing balls recipe involves a combination of herbs with sage as the dominant flavour, hard Italian cheese and strips of parma ham to decorate. Wrapping the stuffing balls in the ham is easier than it looks and gives each one the appearance of a cute little present. The butter that is used to grease the baking dish is dotted with sage leaves before it goes in the oven – this is perhaps the easiest way to make a yummy sage butter that can then be used on fish, chicken, turkey or potatoes. Seriously, what is not to like about these stuffing balls? Why not make them all year round?

500g sausage meat (or the meat from Italian sausages)

2 tablespoons chopped fresh basil (like the parsley, dried basil will do the job if you can’t get it fresh)

50g Italian hard cheese, grated (I used grana padano, because I like the flavour better than parmesan, but parmesan is fine too)

Salt and pepper to taste